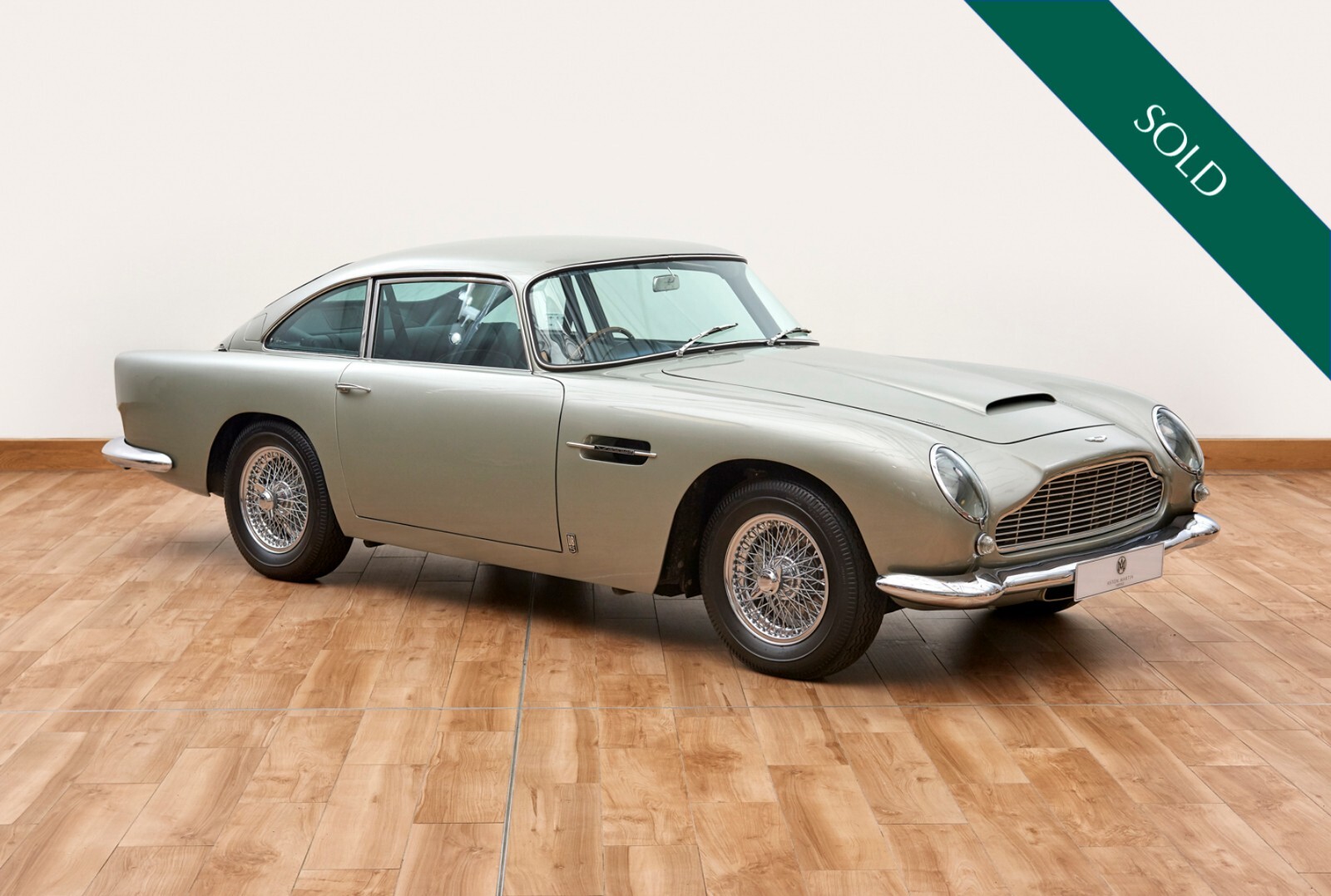 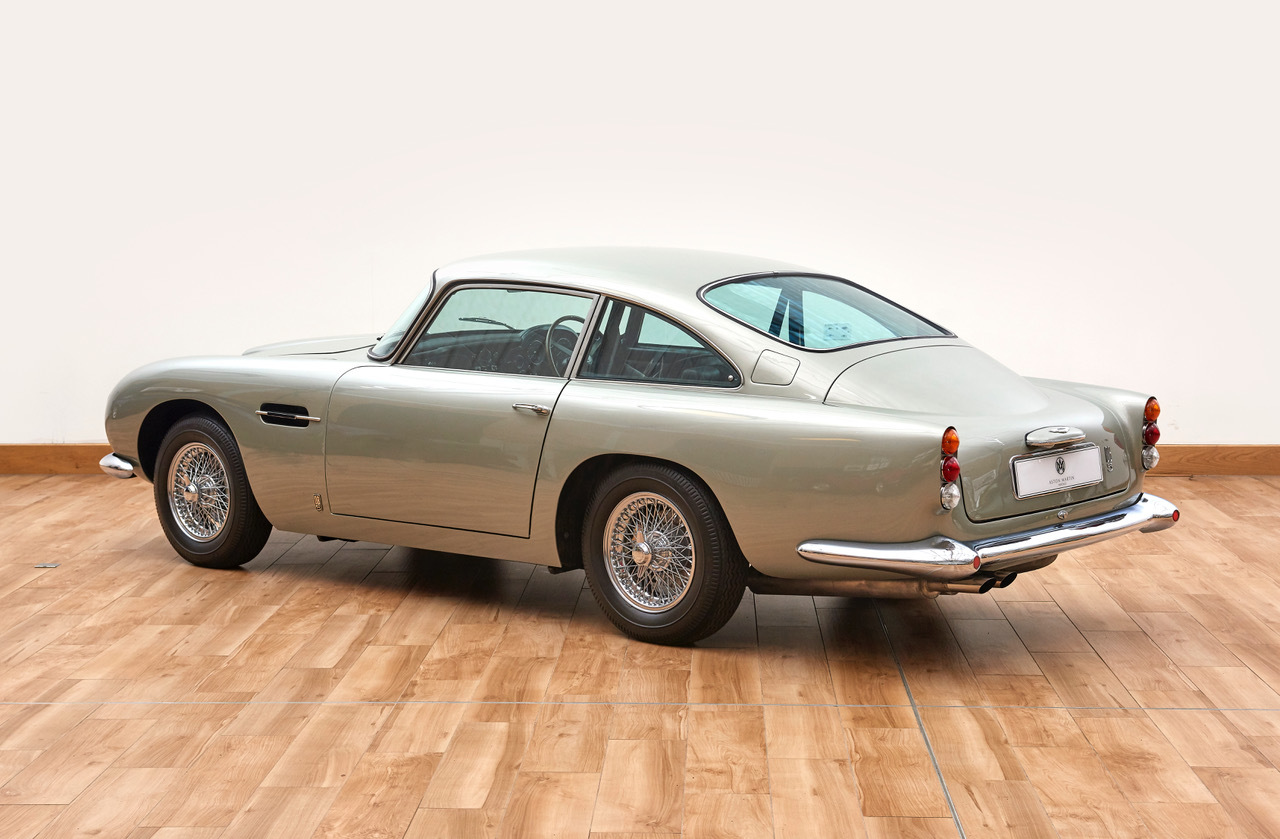 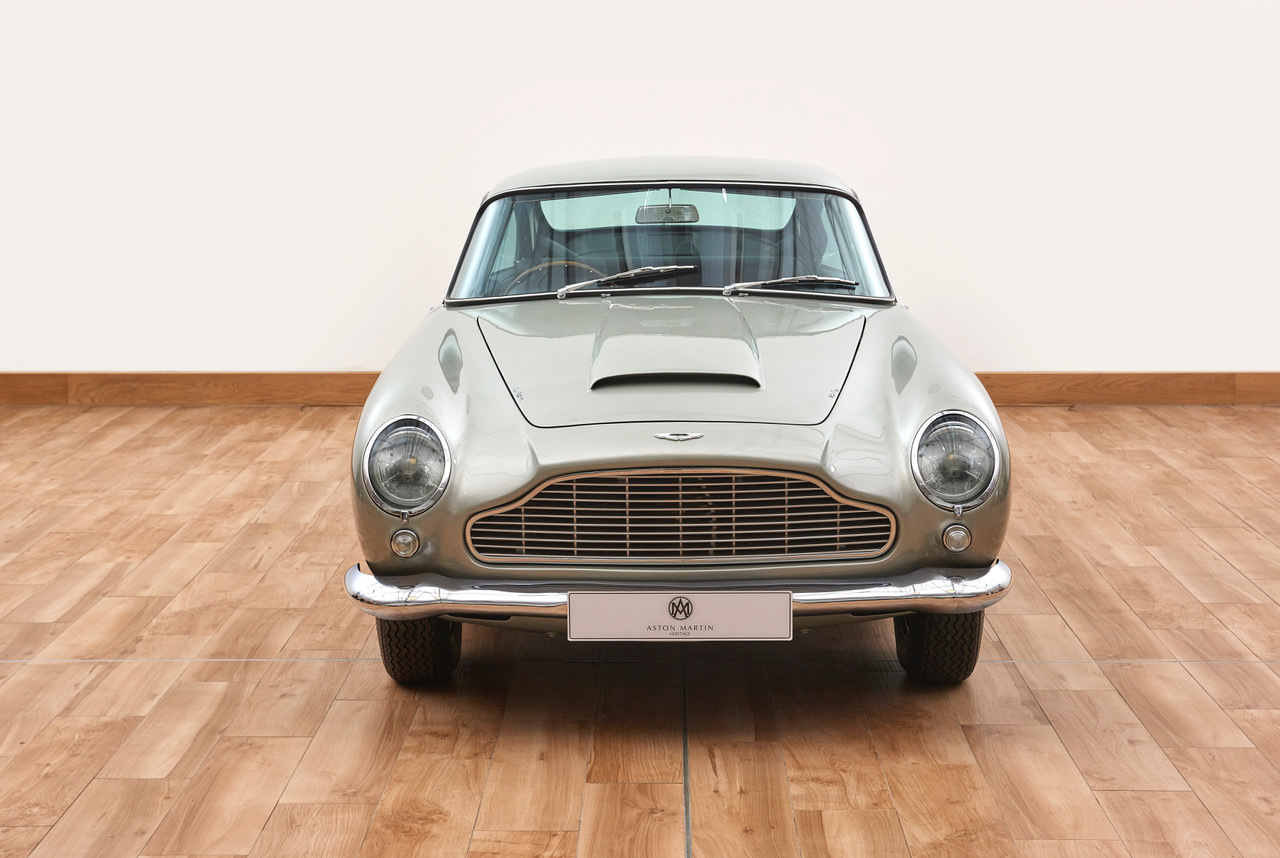 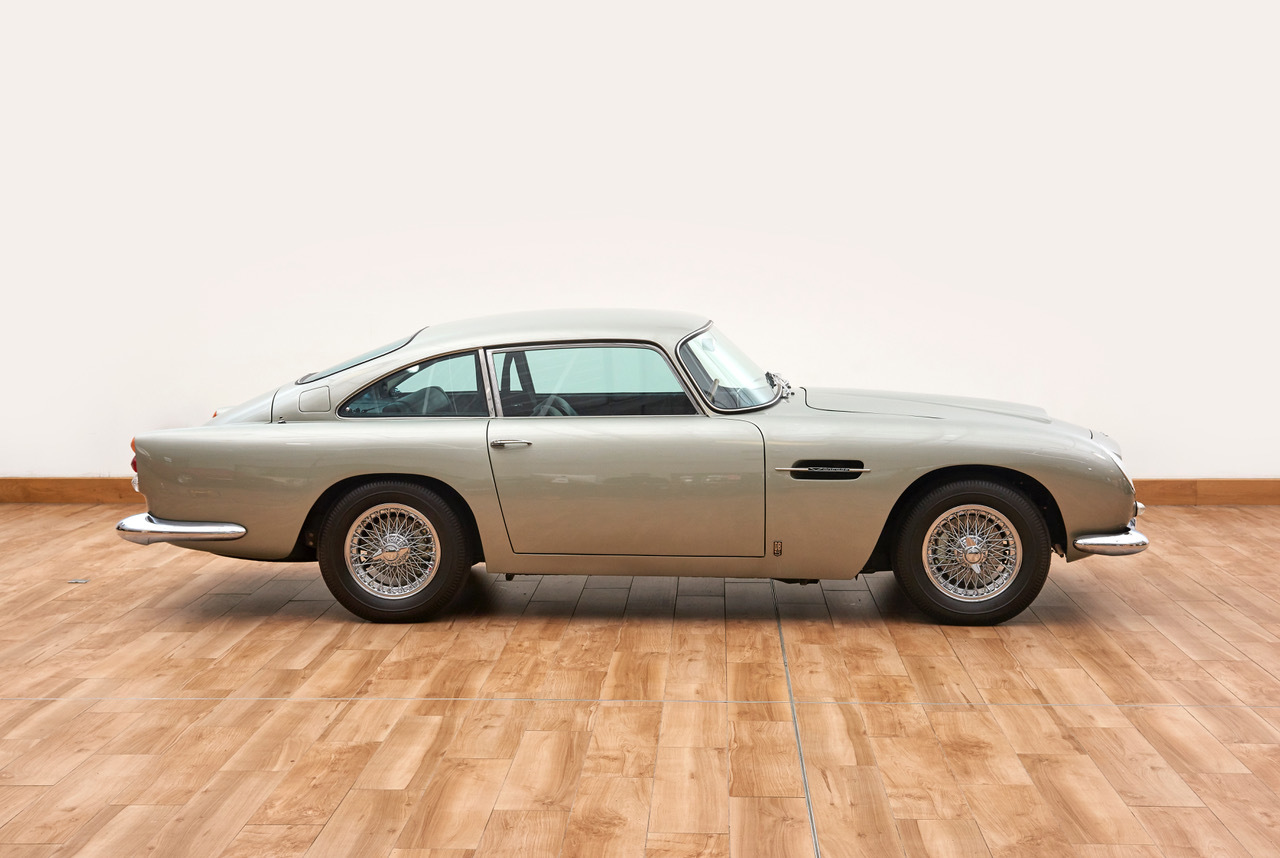 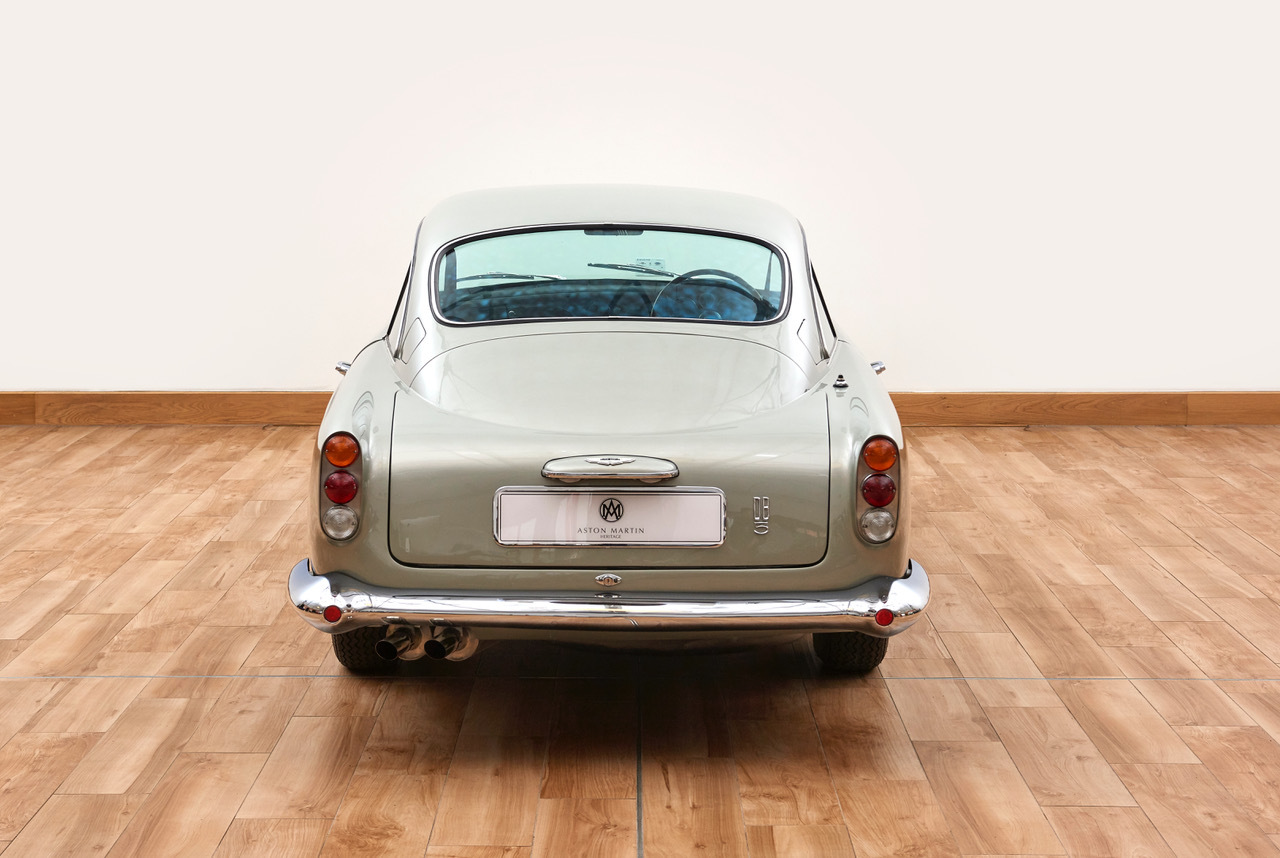 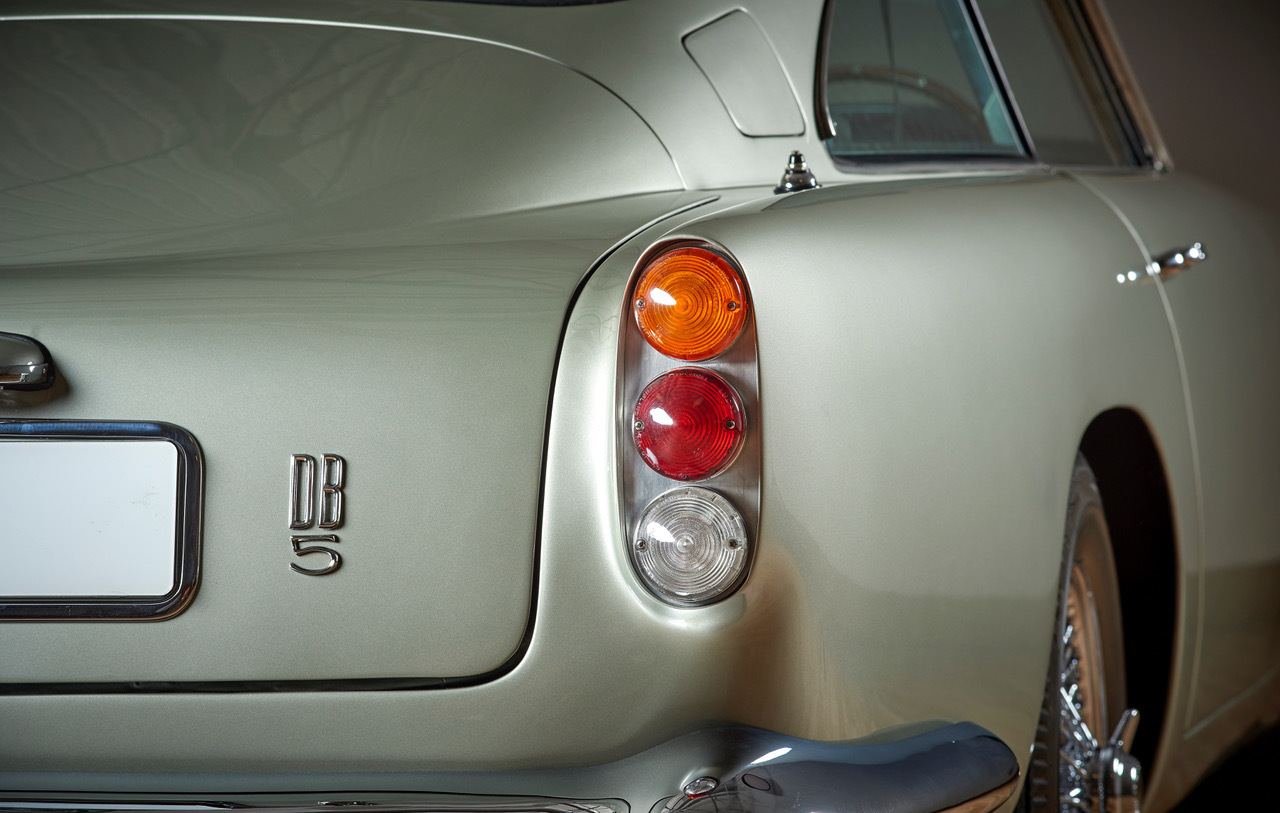 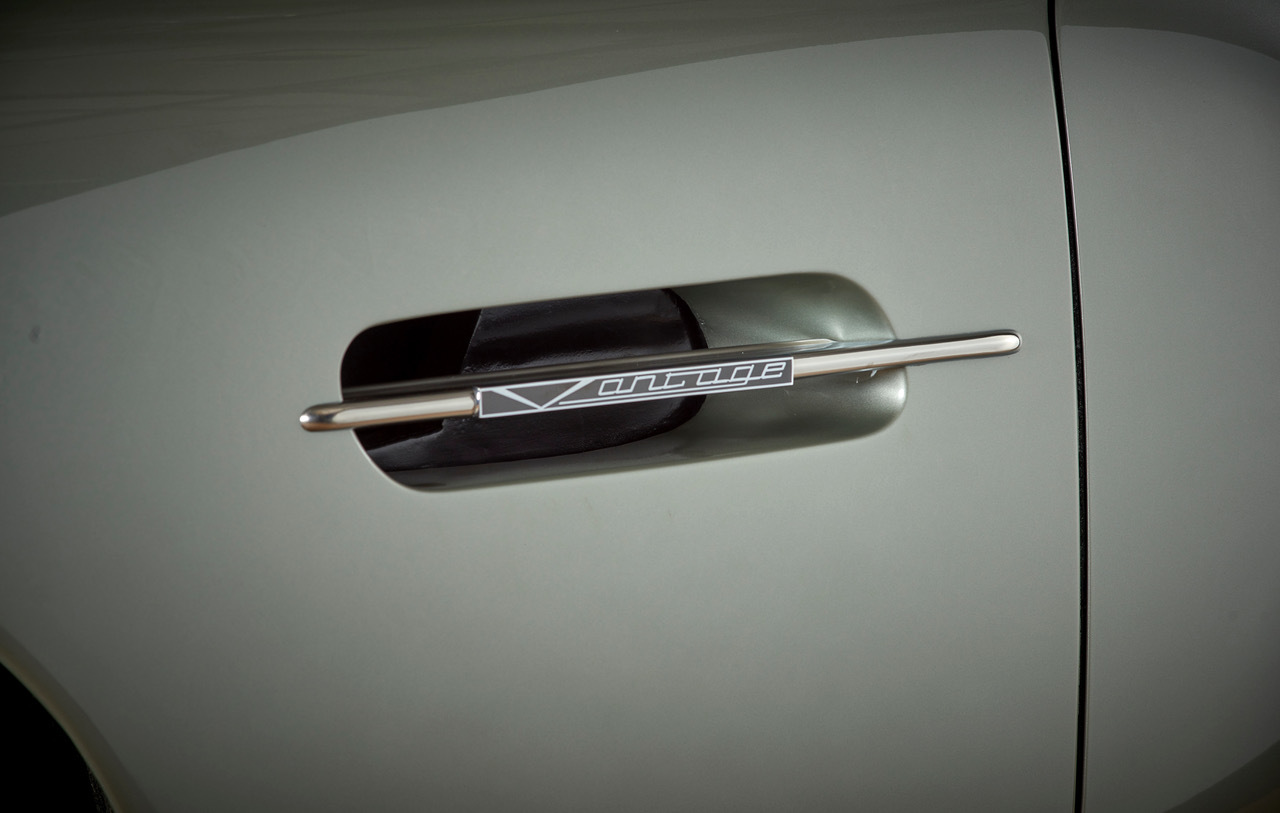 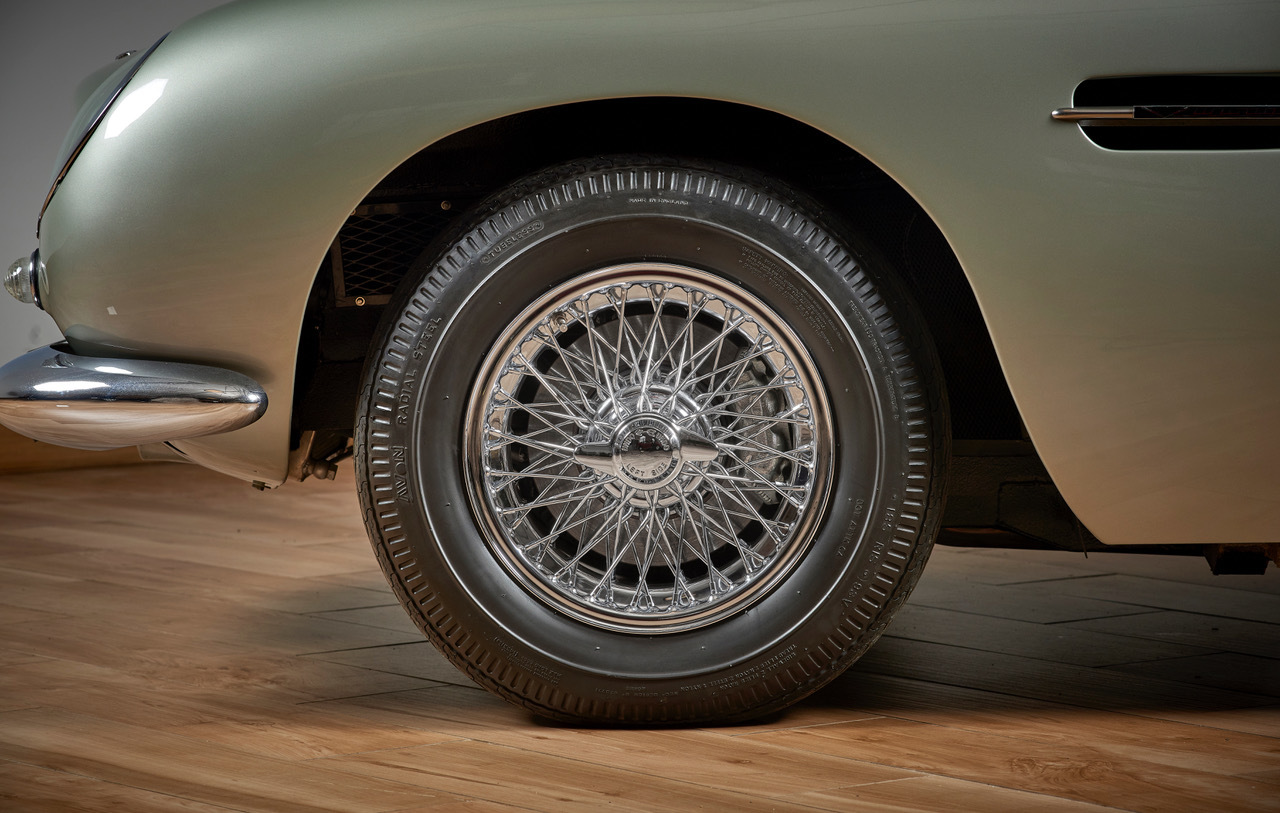 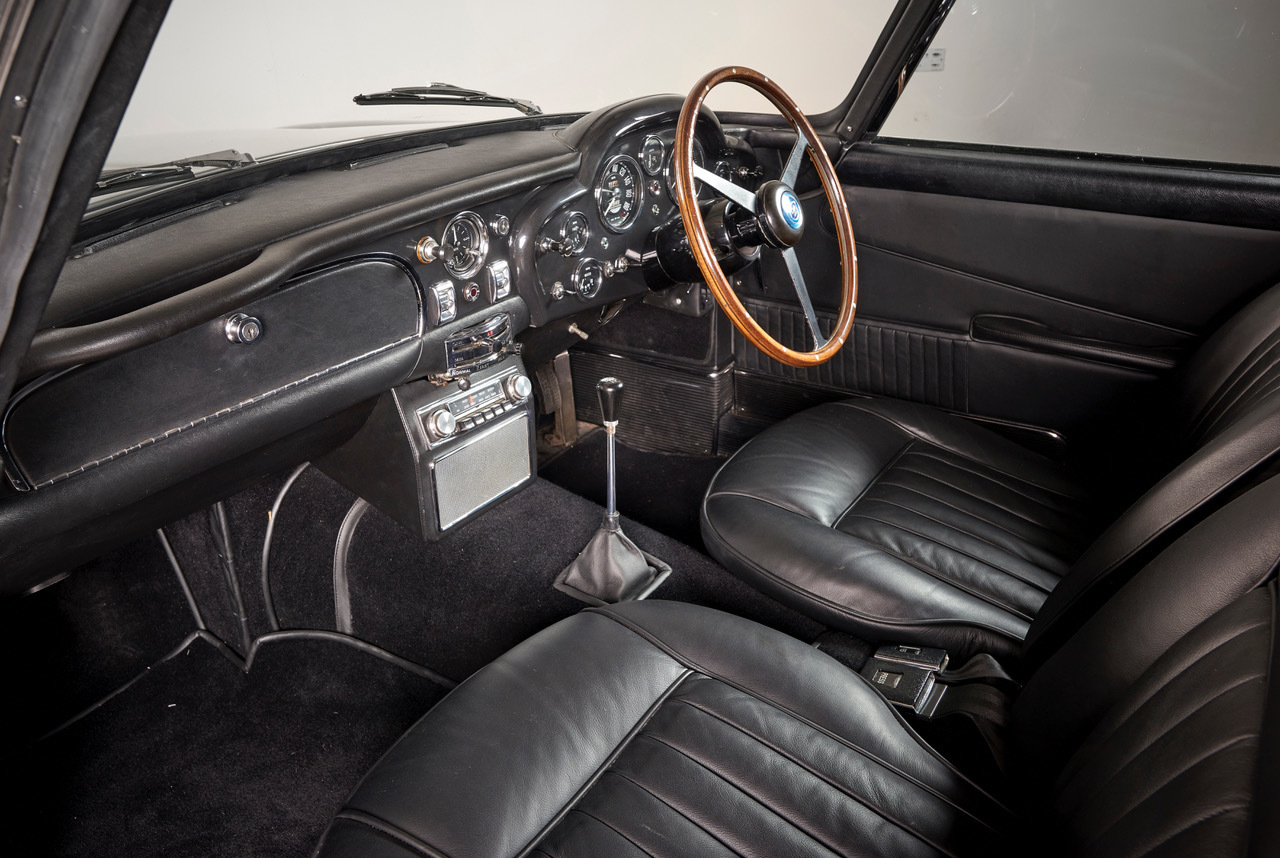 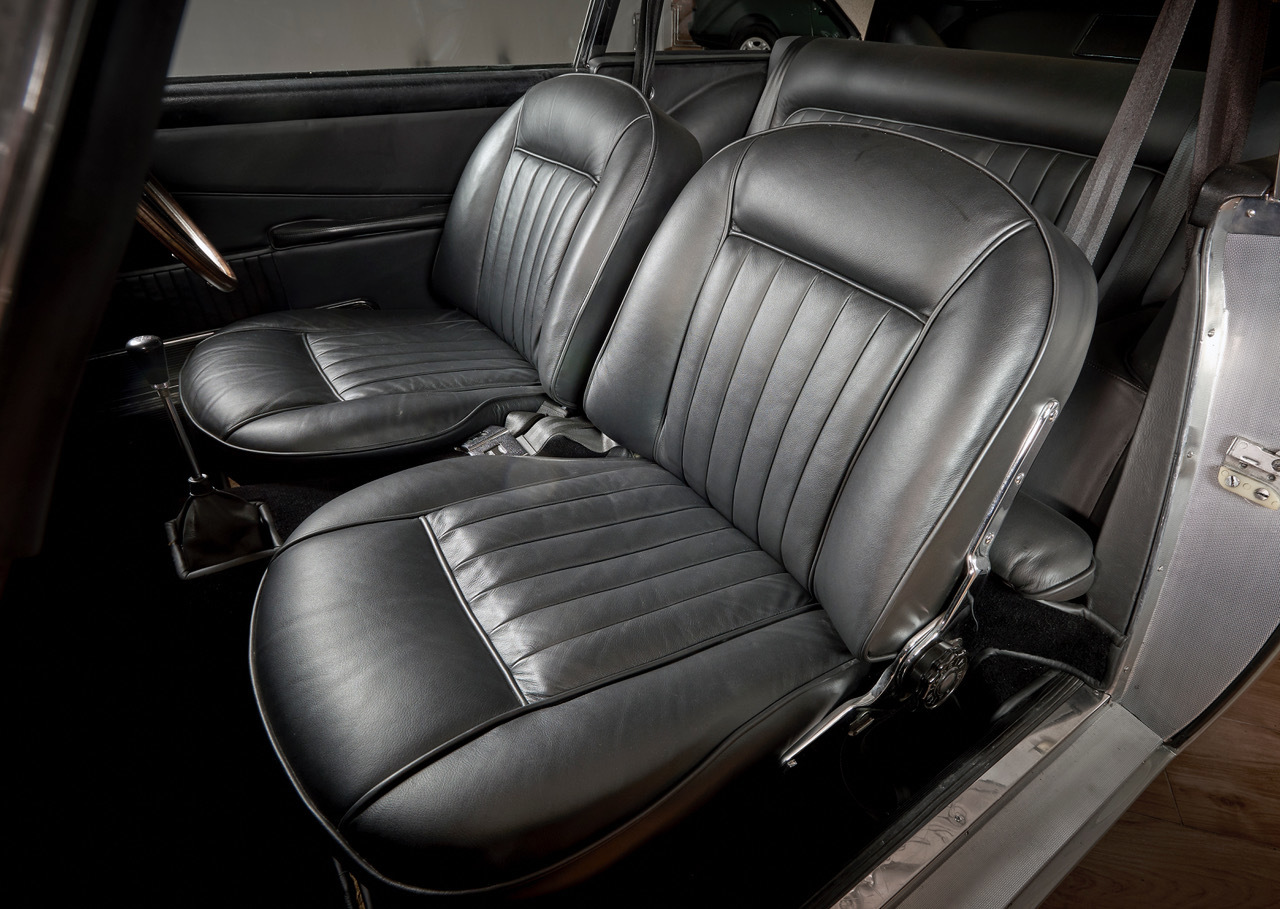 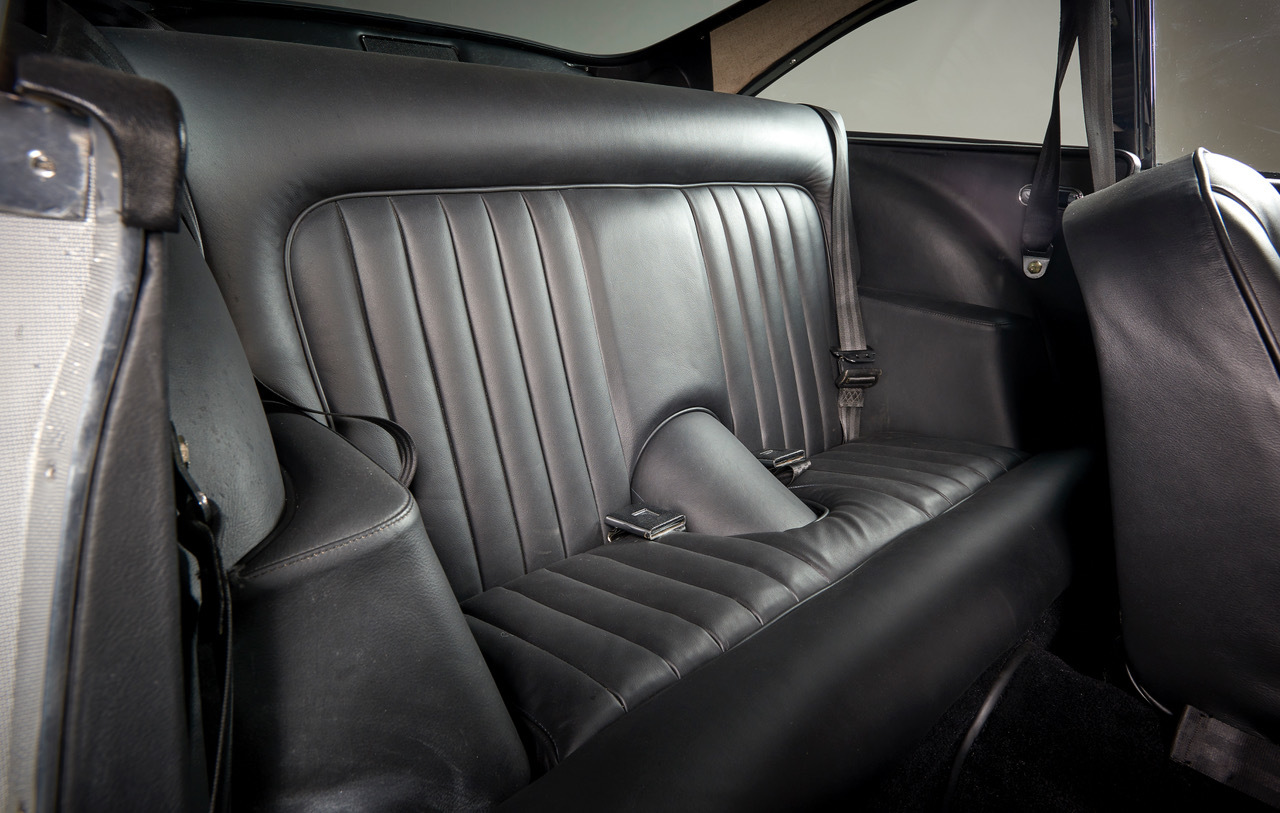 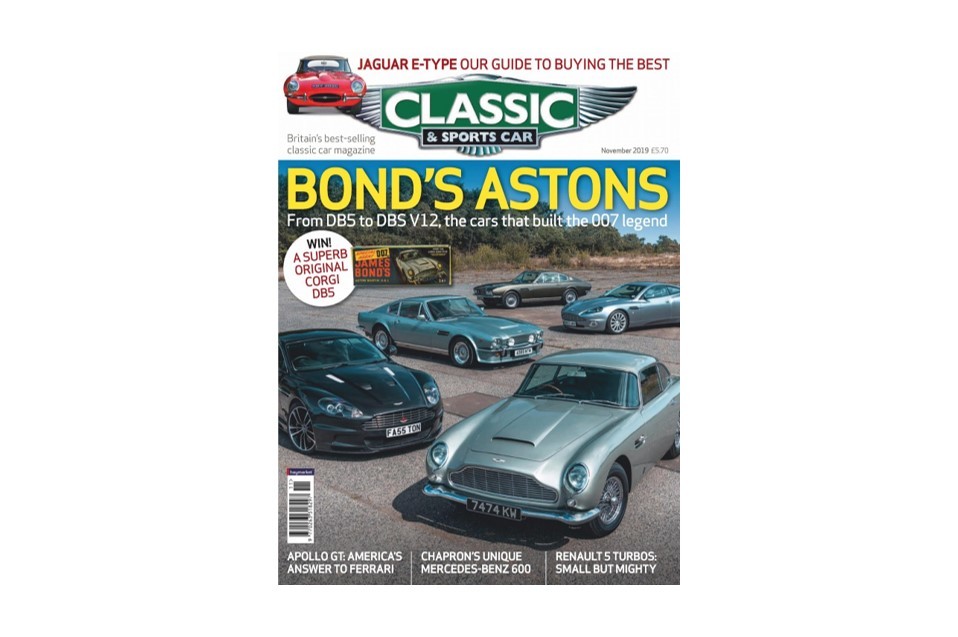 Chasiss # DB5/1401/R Engine # 400/1365 The iconic Aston Martin DB5. The most famous car in the world. Probably. Aston Martin Works are delighted to present this truly splendid example of the preferred transportation choice of Ian Fleming’s greatest ever spy. DB5 ‘1401’ was originally commissioned in Dubonnet Rosso, a colour synonymous with earlier DB’s and entirely recognisable as Aston Martin. A little known fact should be noted here that the original Goldfinger car also started its life painted in dark red. A client of Fixby, Huddersfield is down as the first owner of this car, now offered for sale. The admiring glances 1401 would have seen as it whizzed down the country roads of West Yorkshire would have made any owner smile with contentment and pride. A few months later, in October of the same year, we note the fitment of the now highly collectible Motorola radio, as extra entertainment for its passengers, as if the rumble of the sumptuous 4.0 litre Tadek Marek engine weren’t enough. Many trips of thoroughly enjoyable and doubtless ‘spirited’ motoring were clearly enjoyed with 1401 as the history file shows a change of owner after the first owner had clocked over 10,000 miles in the first year alone. The baton of custody was then passed to a Mr R.J.C. in 1965 and her new home was to be in the landlocked county of Staffordshire, in the West Midlands. We then skip forward some decades on, taking us into the eighties. Receipts for work carried out by the highly regarded Aston Service Dorset in April ’84 tell us that 1401 had eloped West, to Anglesey under the keepership of one Mr L.J. of Llys Dulas. At some time in the following year, a clearly diligent Mr A. P. of Aerdenhout, Holland took on the mantle of responsibility for our intrepid steed and this time we can see how diligent an owner he clearly was, commissioning Aston Engineering to undertake a project of notable works over the coming years, to include a re-paint in the Spring of ’88. During the storm-battered winter of 1987, 1401 was also to have her sills repaired, again by the renowned experts at Aston Engineering. A modest skip on takes us to the capital, where she was acquired by a Mr HMB of Fulham, London in the summer of ’91 and soon-to-be member of the AMOC, as a Christmas present to himself in the December of that year. By now, 1401 had developed into a full blow Vantage specification, complete with Weber carburettors and increased horsepower. Servicing and maintenance during this chapter were in the main, undertaken by Goodwood Green Classics of London, SW8 and there are a substantial volume of receipts attesting to this followed by a brief spell at Trinity Engineering. The heatwave of the Summer 2016 was in hindsight, probably not the most comfortable time to undertake a refurbishment project but nonetheless, perseverance clearly paid off and the quality of the workmanship is evident in the finished article, undertaken by its then owner directly. To compliment matters, in 2018, Aston Martin Works undertook a major overhaul of the engine, which has also included an engine bay re-paint, engine tune and bench-test, complete with new head-gasket. 1401 now sits resplendent in her glorious new colouring of Silver Birch with the obligatory demure black Connolly hide interior, powerful Weber-fed Vantage engine and refurbished running gear, ready for her next custodian to enjoy a very special motoring chapter with pride. Supplied fully factory serviced, ready to go and with 12 months Classic Car Warranty, her next owner cannot fail to be impressed. For added flattery, she can be seen in pride of place on the front cover of the November 2019 edition of Britain’s best-selling classic car magazine, Classic & Sports Car.
Book a test drive
Make an enquiry
Print details