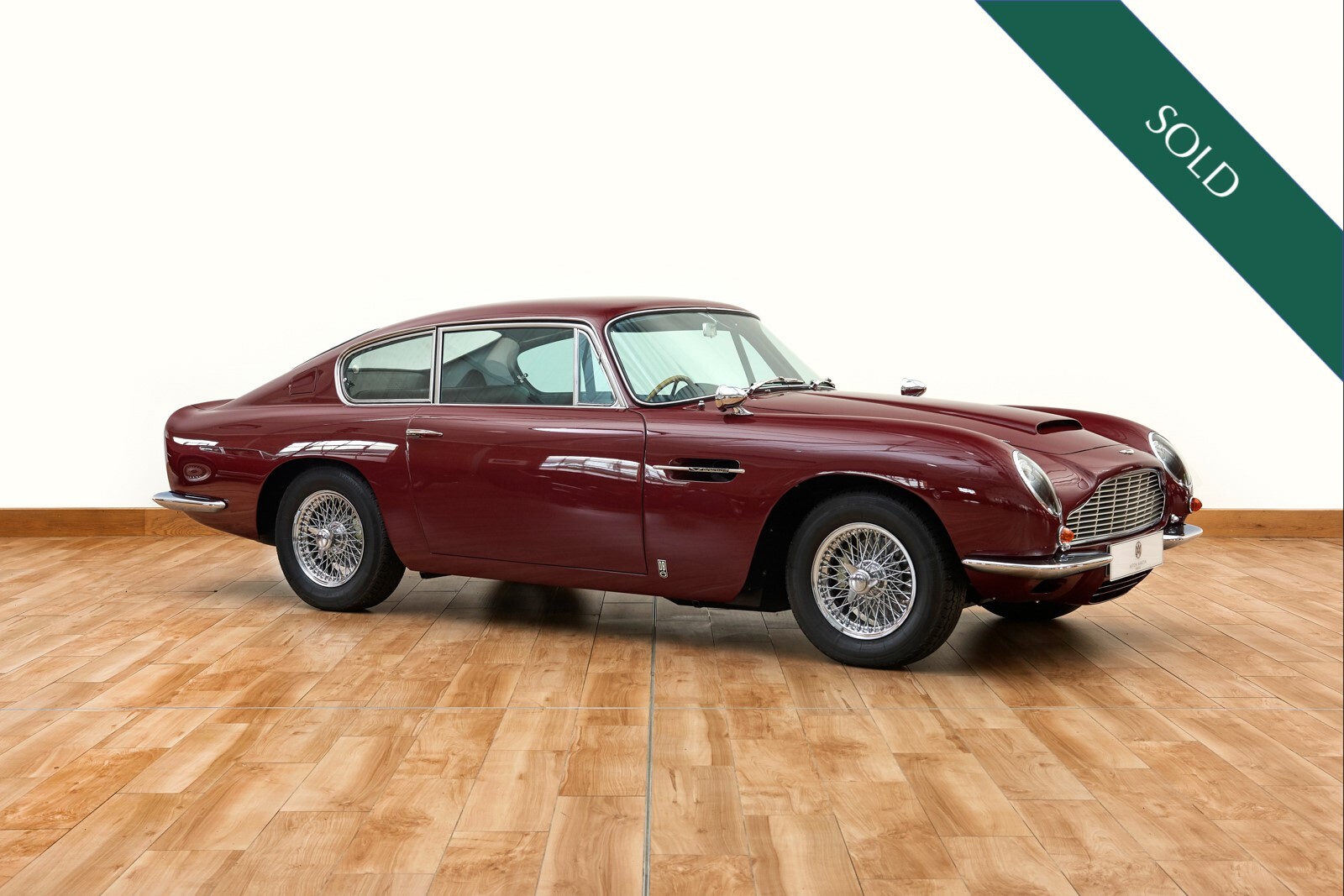 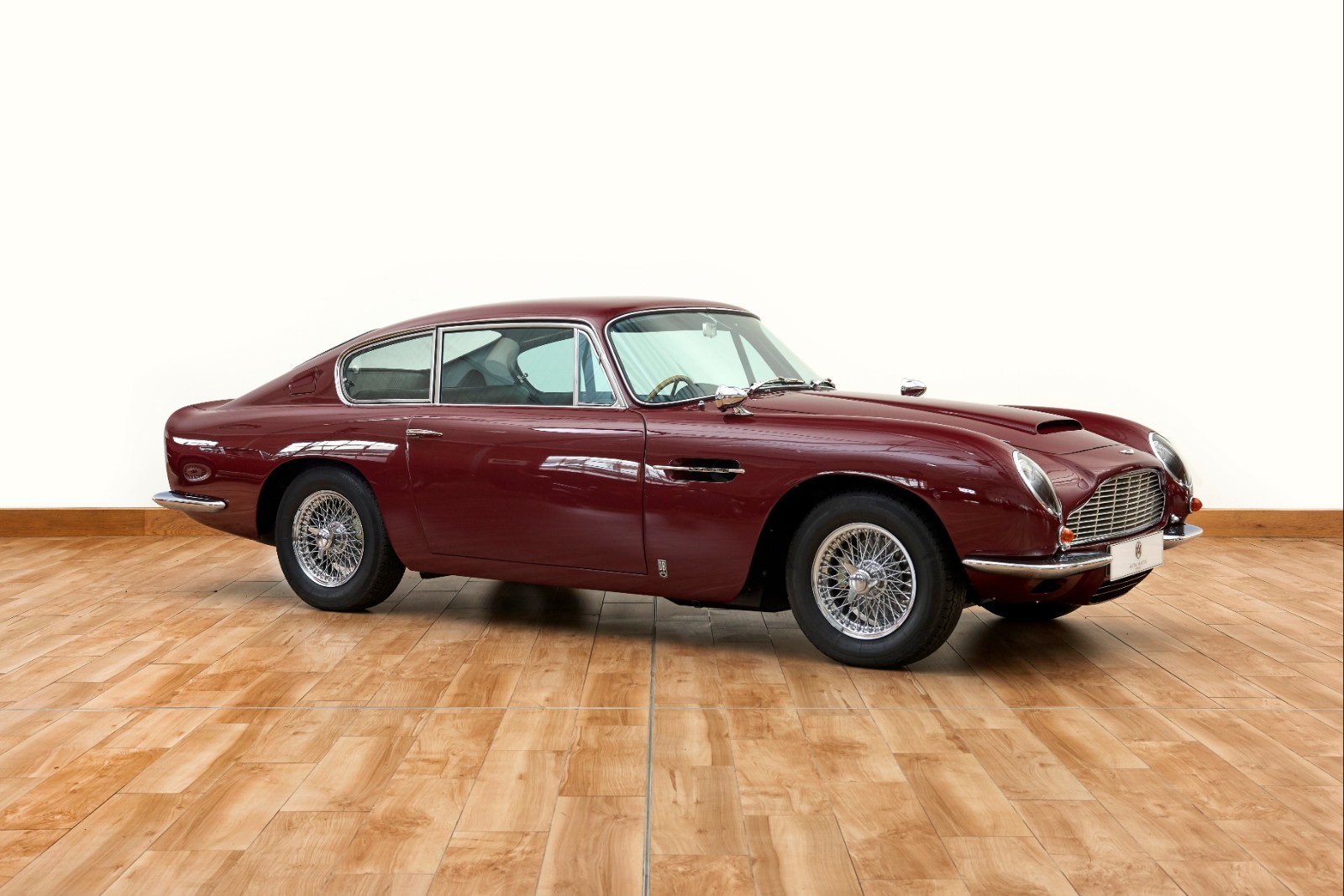 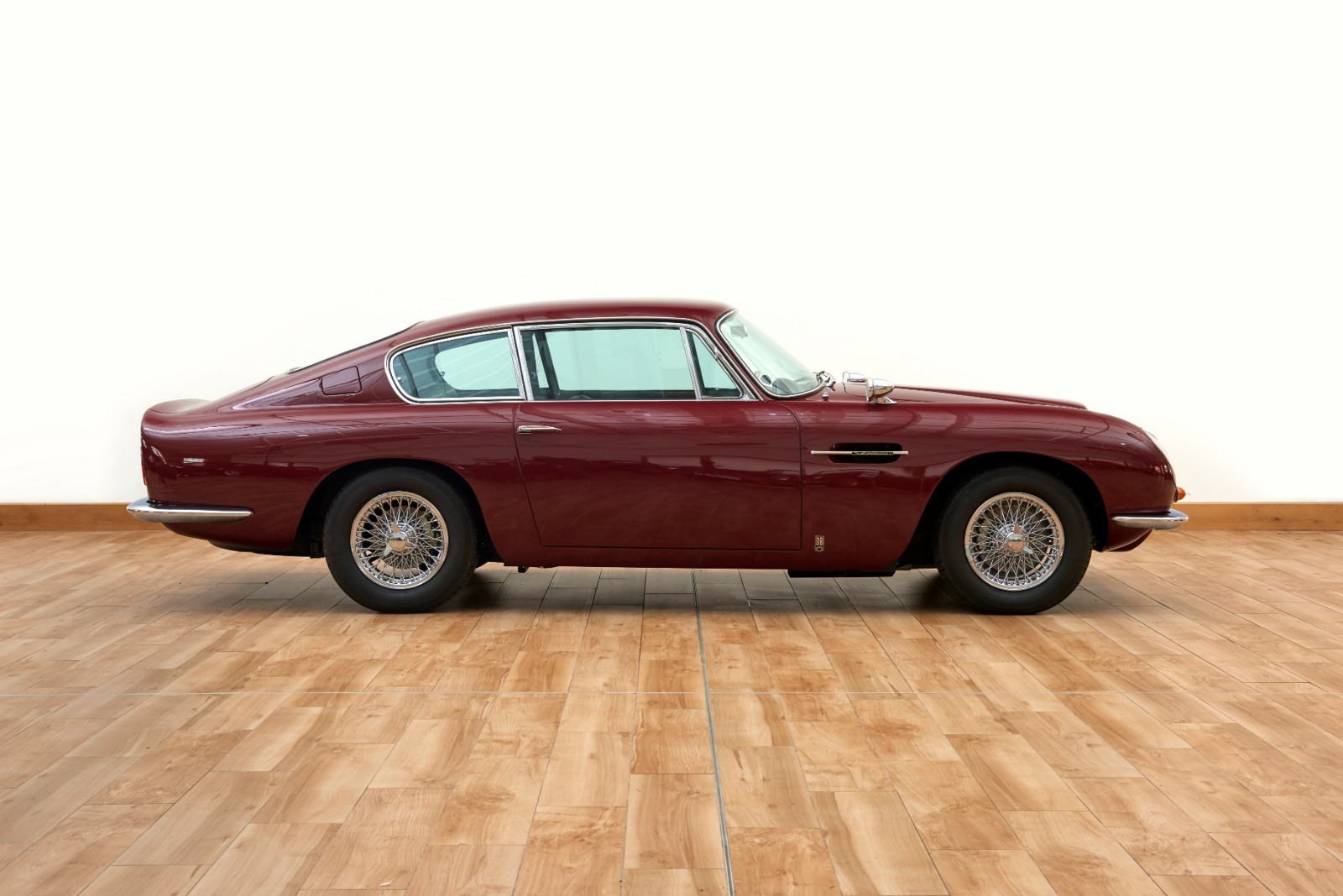 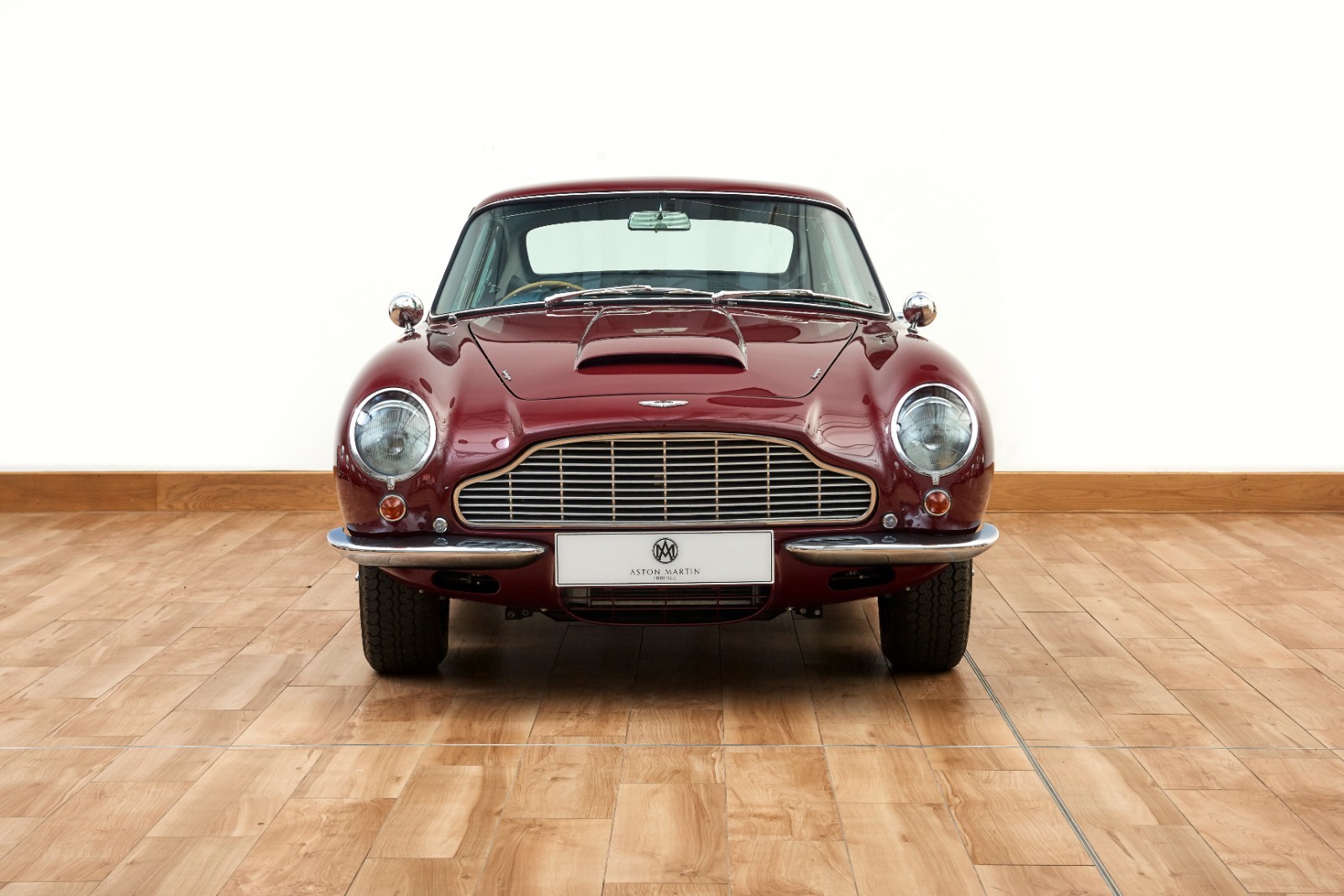 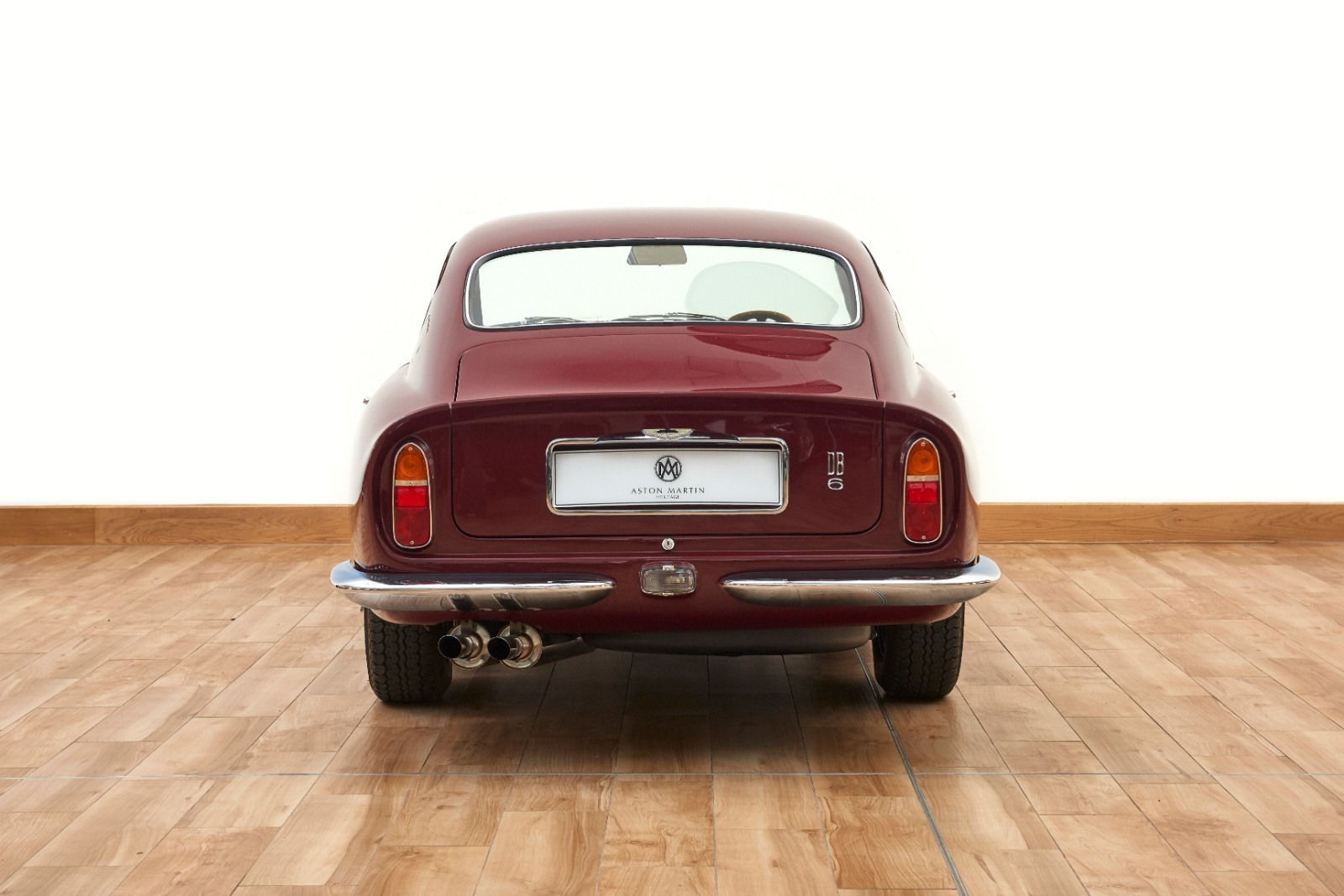 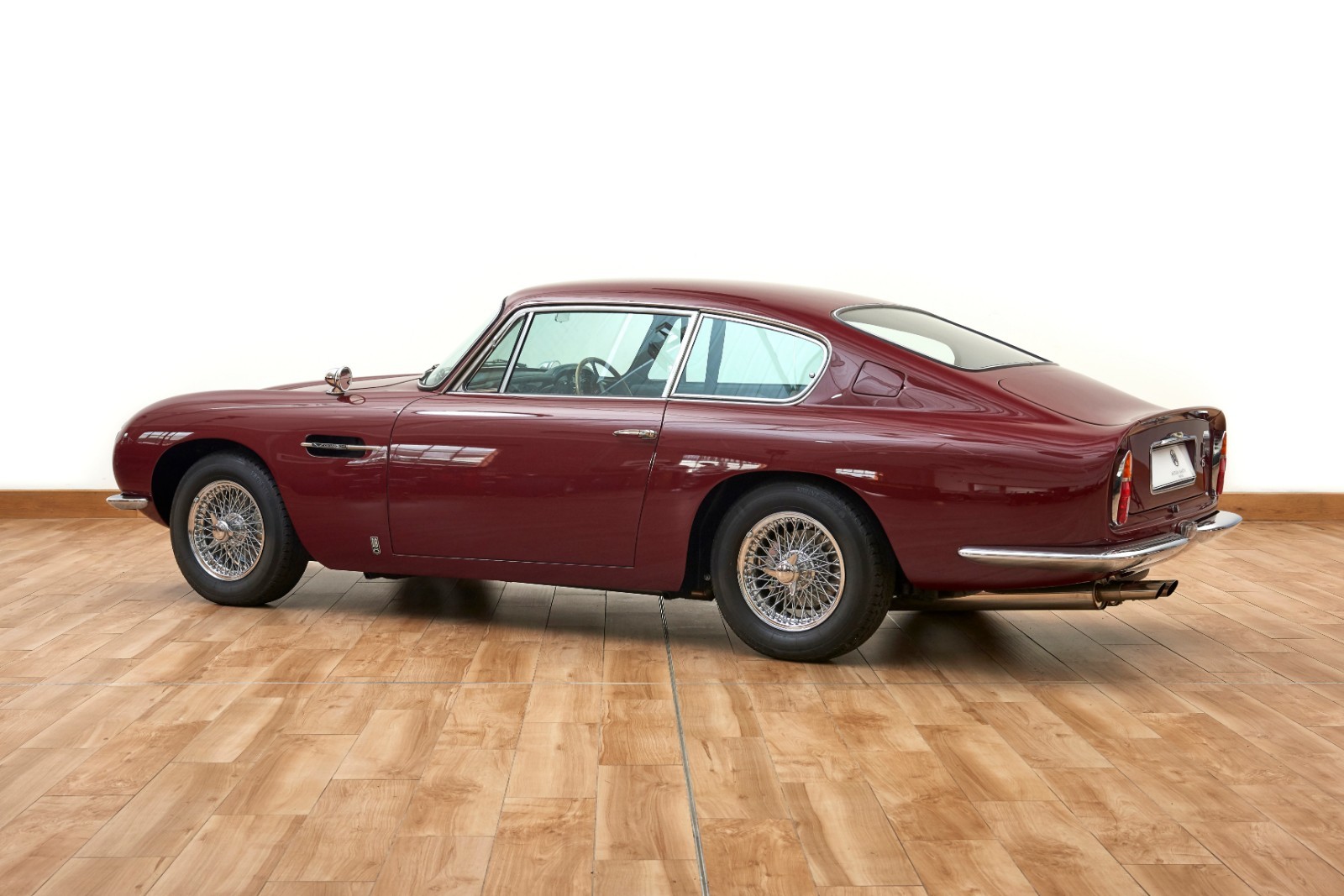 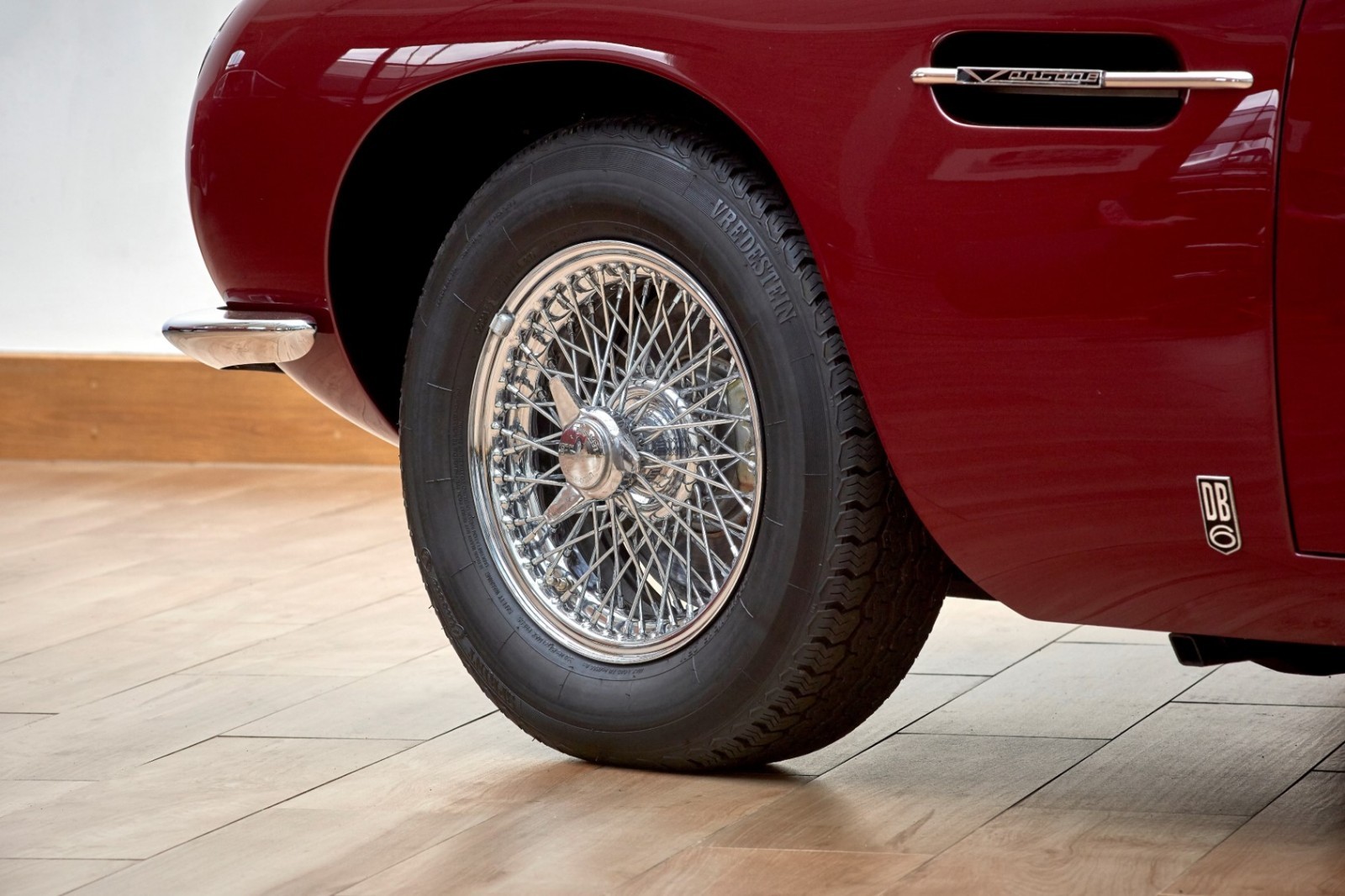 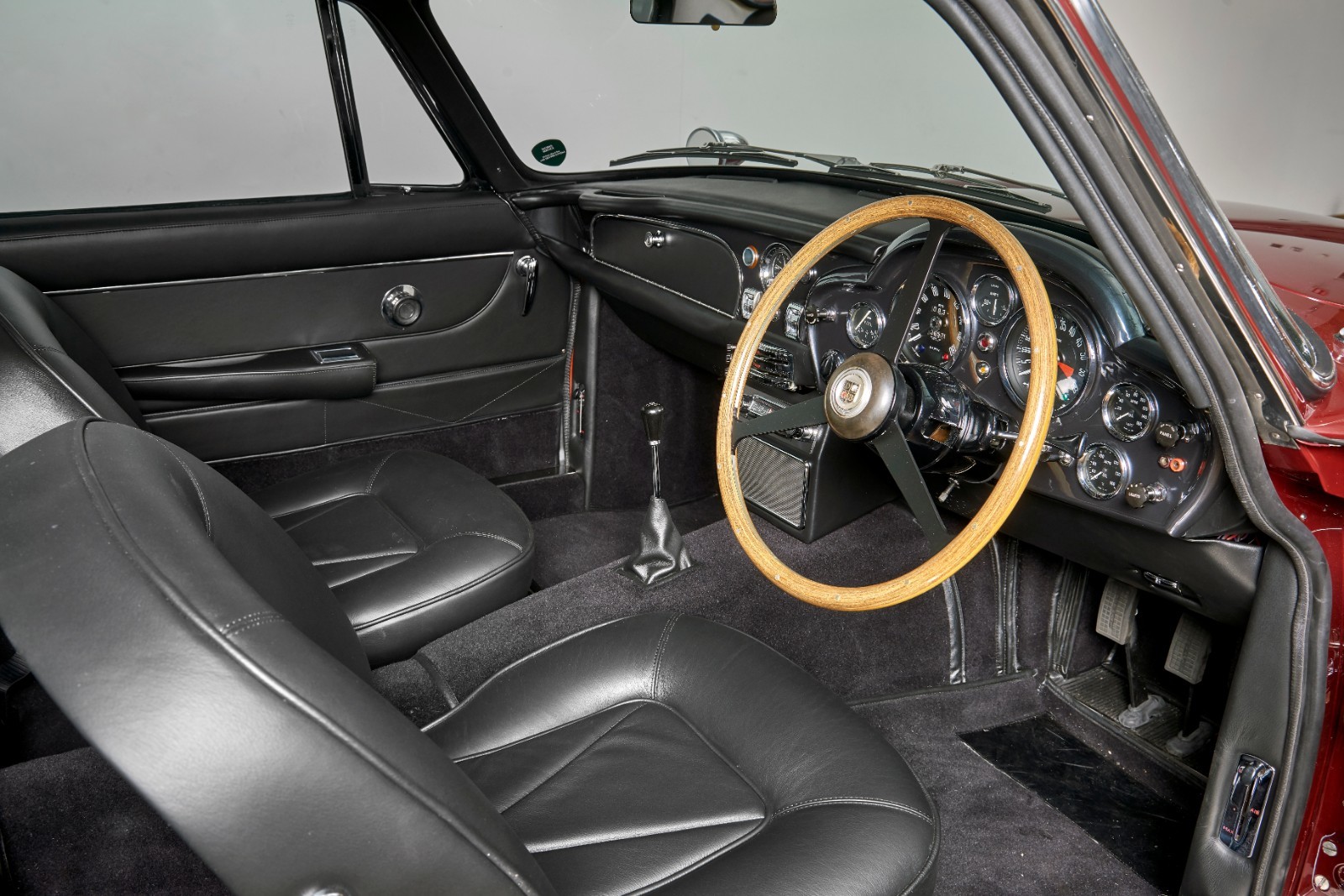 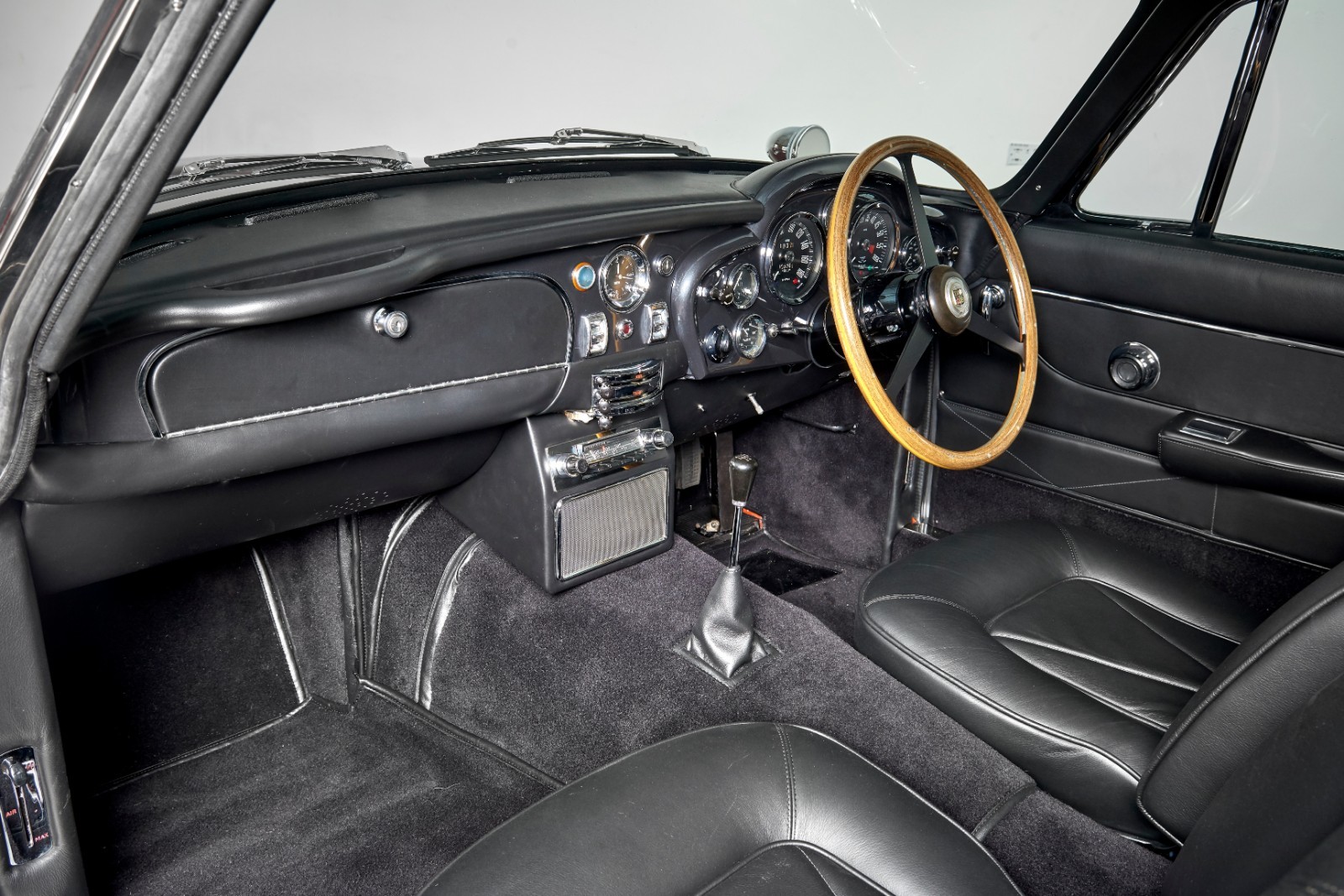 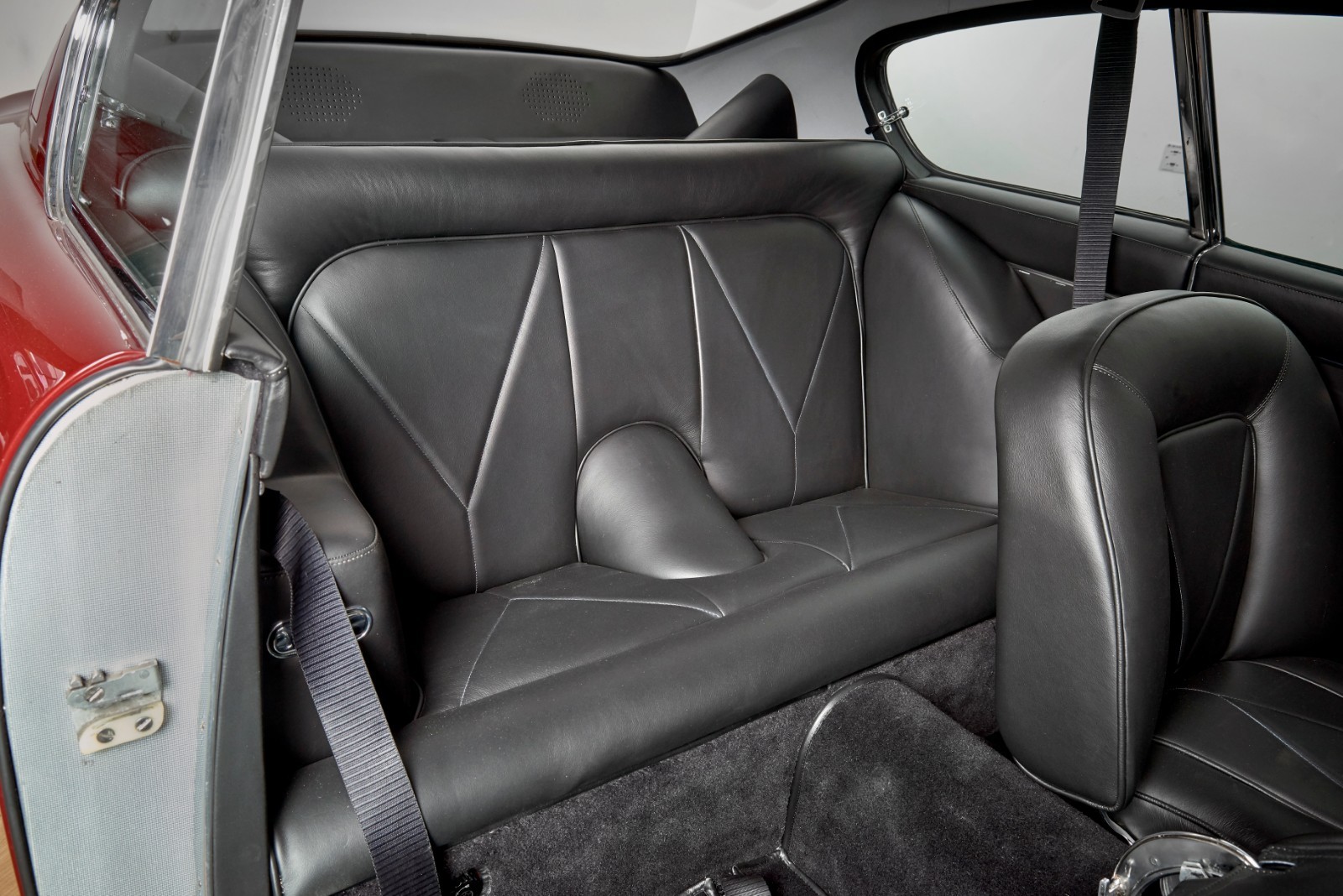 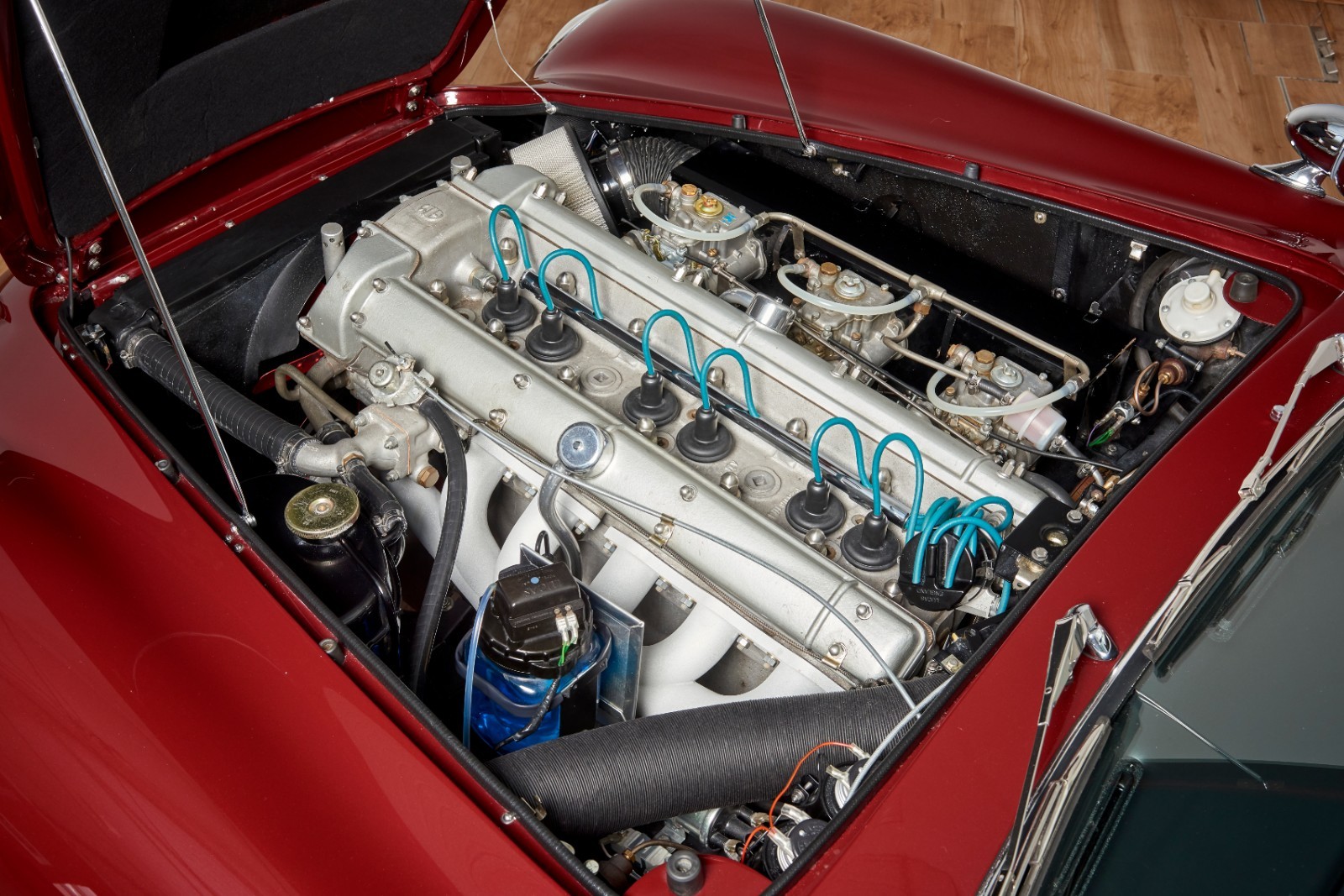 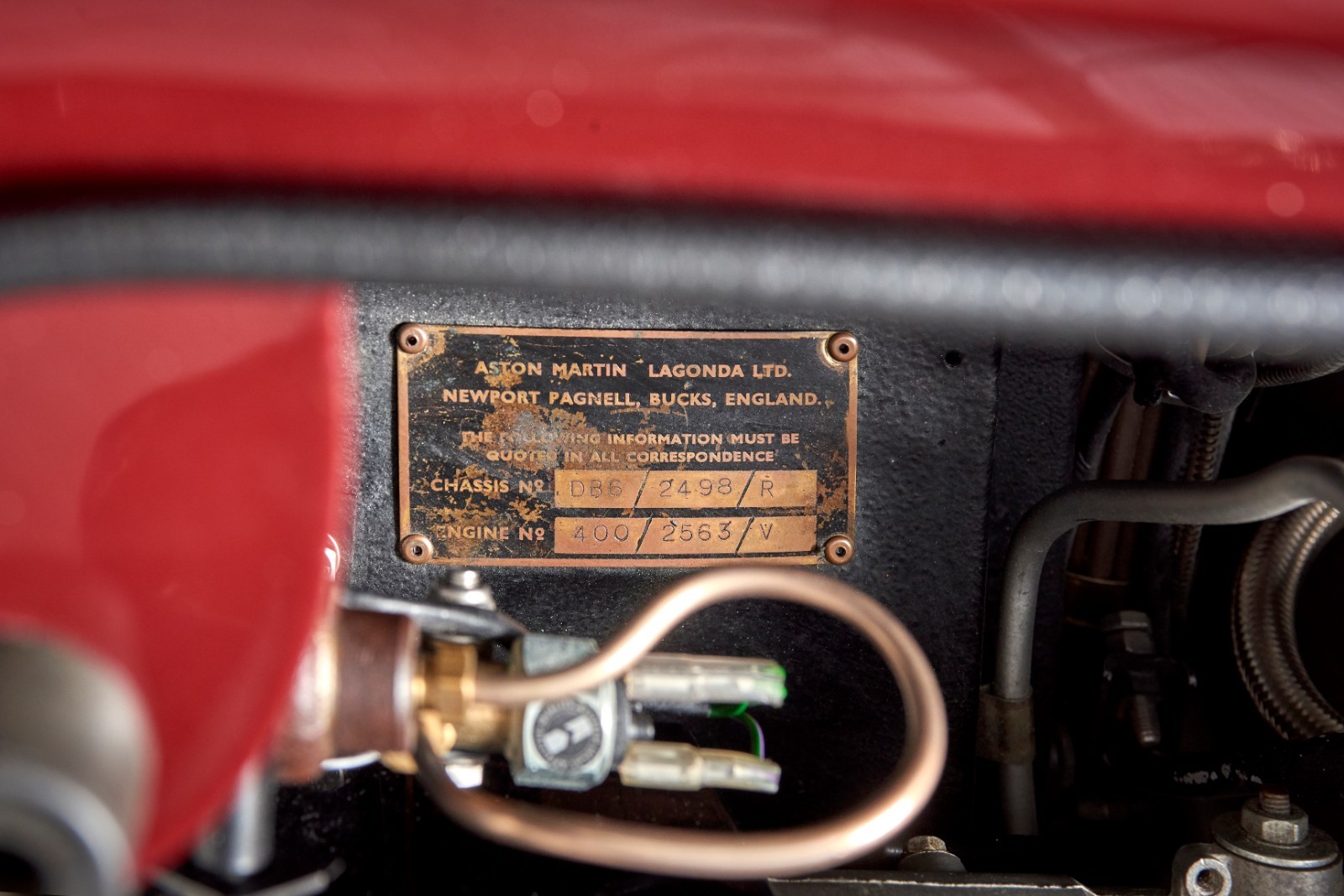 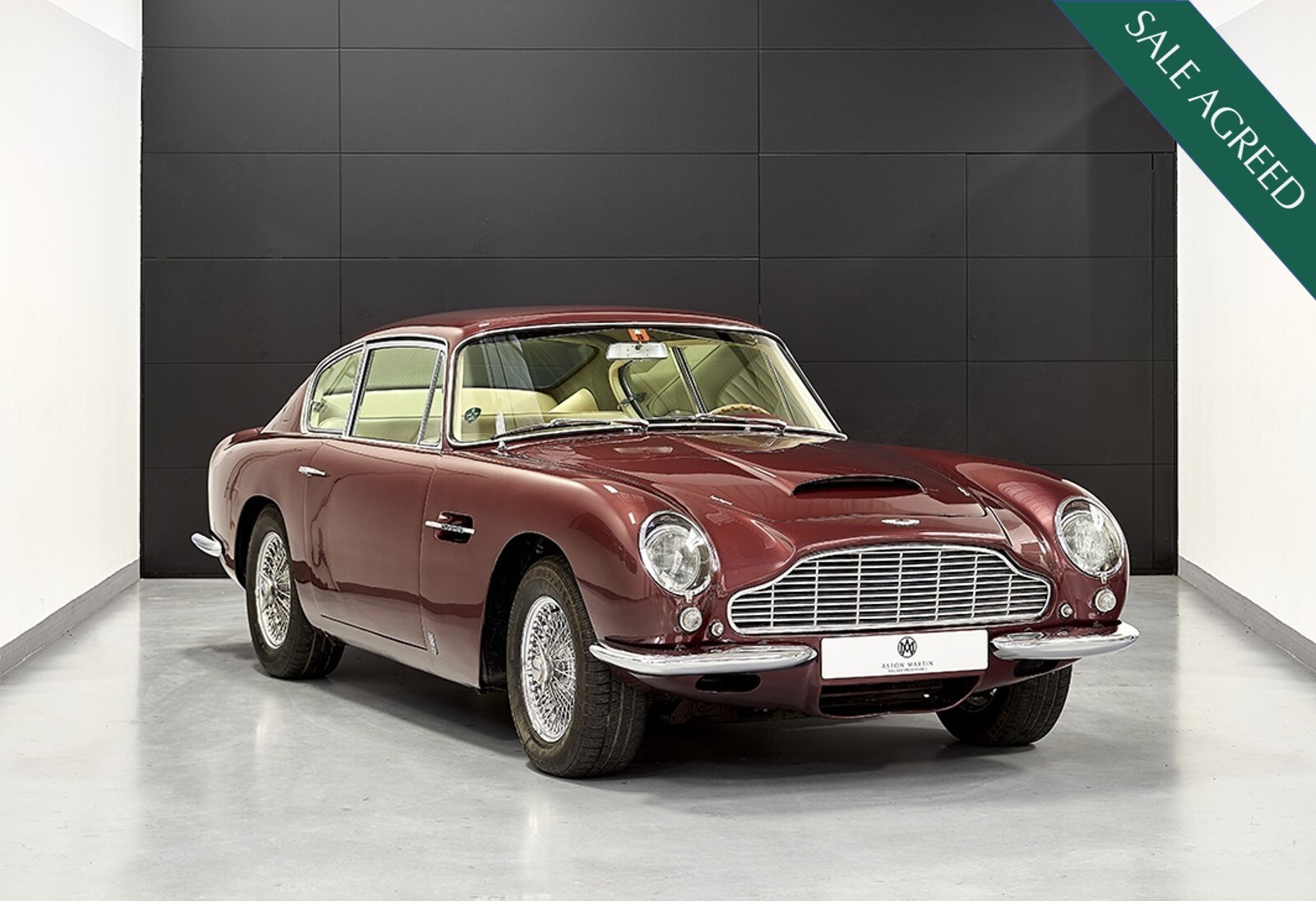 Chassis # DB6/2498/R -Matching Numbers-Delivered new in the UK-Vantage specification from new-Present ownership since 2009-Extensively refurbished by Aston Martin Works (2017-2019) -Fewer than 1,000 miles covered since completion Detailed HistoryThe culmination of Aston-Martin's original line of 'DB' six-cylinder sports saloons, the DB6 was introduced in 1965. Recognisably related to the Touring-styled DB4 of 1958, the DB6 abandoned the Superleggera body structure of its predecessors in favour of a conventional steel fabrication. The wheelbase was now 4" longer than before, resulting in an extensive re-style with more-raked windscreen, raised roofline and re-shaped rear quarter windows. Opening front quarter lights made a re-appearance, but the major change was at the rear where a Kamm-style tail with spoiler improved the aerodynamics, greatly enhancing stability at high speeds.'The tail lip halves the aerodynamic lift around maximum speed and brings in its train greater headroom and more luggage space,' revealed Motor magazine, concluding that the DB6 was one of the finest sportscars it had tested. 'The DB6 with its longer wheelbase and better headroom makes an Aston Martin available to the far wider four-seater market, and the design is in every way superior to the previous model. A purist might have thought that the longer wheelbase would affect the near-perfect balance of the DB5, but if anything the DB6 is better.'The Tadek Marek-designed six-cylinder engine had been enlarged to 3,995cc for the preceding DB5, and remained unchanged. Power output on triple SU carburettors was 282bhp, rising to 325bhp in Vantage specification. Borg-Warner automatic transmission was offered alongside the standard ZF five-speed gearbox, and for the first time there was optional power-assisted steering.Motor clearly appreciated the power and poise of their test Vantage: 'In an effortless way that few other cars can match, the DB6 makes an overall speed limit of 70mph look quite ridiculous. At its maximum speed of more than twice this, it is reassuringly stable, probably more so than many cars struggling to maintain their 70mph convoy speed. If you need to stop from high speed the brakes are outstandingly powerful, a point which really needs remembering if there is a less well-endowed vehicle behind; and the handling in both wet and dry conditions is superior to all but a couple of the production two-seater sportscars we have tested.'This manual transmission DB6 Vantage was sold new via Broadway Autos of Cricklewood to first owner W Miller & Sons Ltd of London E3 and originally registered as 'LLB 111D'. The accompanying copy guarantee form records the original livery as Dubonnet with black leather interior, and lists 'non-standard' equipment that included the Vantage engine, chromed wheels, heated rear screen, 3-ear hubcaps, Motorola radio and power-operated aerial. Although the build sheet lists SU carburettors, service records from 1967 suggest that Webers were fitted from new.From 1972, '2498/R' resided in New Zealand, returning to the UK in 2001. The Aston then passed into the ownership of Mr Michael Ryan in the Republic of Ireland where it was registered as '66 WW 504', forming part a small but distinguished stable of cars in that country. Its immediately preceding owner acquired the Vantage in 2008, keeping the car for only a relatively short time before offering it for sale at Bonhams' Goodwood Revival auction in September 2009 (Lot 223) where it was purchased by the current vendor. Over the last two years '2498/R' has been rebuilt by Aston Martin Works and returned to its original exterior colour of Dubonnet; original components were retained wherever possible and the extensive related bills are on file. Fewer than 1,000 miles have been covered since the engine re-build's completion earlier this year and this stunning DB6 Vantage is presented in commensurately excellent condition. Accompanying documentation includes the aforementioned copy guarantee form and restoration bills, a V5C Registration Certificate, and current MoT. The car has been issued with the all-important certificate of Aston Martin Assured Provenance.A recent introduction, Aston Martin Assured Provenance is a programme designed to assess the originality, condition, and historical significance of the company's Heritage cars. The process consists of a bumper-to-bumper inspection of the car; a 3D scan to assess its structural integrity; build specification comparison; road test and report to assess mechanical health; and a thorough assessment of the outcome of these inspections and the car's provenance records by a committee of Aston Martin experts. On approval, the client receives the Assured Provenance Package consisting of a richly illustrated record book; a USB containing records of all digital data collected; a pair of dash plaques; a pair of sill plaques; and the Heritage Assured Provenance certificate all contained in hand-crafted presentation box.Now sporting its original registration, this has been returned to the car. It is registered "LLB 111D". We are also happy to advise that this has been granted the Gold Standard Aston Martin Assured Provenance.
Book a test drive
Make an enquiry
Print details

At Aston Martin Works, we offer a factory approved one year Aston Martin warranty on all heritage purchases.
This provides peace-of-mind and assurance of factory trained technicians and genuine Aston Martin parts.